To solve a problem, the first step is to understand it. Before you can answer how to dispute a false positive drug test, you should first understand what a false positive means. We’ll quickly describe a scenario for your benefit. You’re on a certain medication to be numb from the pain you’ll feel during a dental procedure, and there’s a drug test coming up soon. This drug test is screening for cocaine. You don’t use the substance, but the test result is positive. That’s a false-positive drug test result scenario.

Simply put, a false positive is an erratic test result indicating the presence of medication, substance, or attribute you haven’t taken. This sounds disheartening, right? Now, you may ask, “what can cause a false positive on a drug test?” The answer is not far-fetched. Certain medications or substances (which are legal and maybe even prescribed for a specific condition that you have) contain chemical compounds that are very similar in structure and composition to compounds that are contained in substances that are commonly tested for.

Like in the above scenario, the anesthetic used for the dental procedure contains a chemical compound that’s very similar in structure to one of the ingredients used to produce cocaine. Now that you know how to dispute a positive drug test, you should also know what medications or substances can have a positive result.

What Medications Can Cause a False Positive?

Knowing this is key because when you’re aware of the compounds or ingredients in the medication you’re taking and the similarity they share with a substance or drug commonly tested for, you’ll know the best defense for positive drug test. These medications and substances include:

Antidepressants are prescription medications for treating and managing depression, anxiety disorders, and certain chronic pain conditions. In some cases, it can even be used to manage addictions. These drugs contain an ingredient that’s also present in LSD or amphetamines that affects how the brain responds to serotonin for emotions, moods, and so on. This explains why a patient medicating on antidepressants will test positive for a drug screen for LSD or amphetamines. Popular examples of antidepressants include;

NSAIDs are the shortened version of nonsteroidal anti-inflammatory drugs. They’re therapeutic medications used to alleviate acute pain, relieve fever, prevent blood clots, and reduce inflammation in the body. They are common medications that can be gotten over the counter. This means that you don’t need a prescription for them. Specific NSAIDs such as Naproxen and Ibuprofen can mess with the drug-testing enzyme when taken in a specific dosage.

DUI Illinois stated that 12 grams of Ibuprofen or Naproxen in your body system could trigger false positives for a drug screen that’s testing for barbiturates or marijuana/THC. On the other hand, NSAIDs such as Oxaprozin can trigger a false positive result for a drug test screening for benzodiazepines.

Just like NSAIDs, antihistamines are common and very affordable over-the-counter medications that you don’t need a prescription to get. These drugs are used for the treatment and management of nausea, morning sickness, allergic rhinitis, influenza, and the common cold. However, there are certain antihistamines that contain Doxylamine (Unisom). This compound is similar to an ingredient present in opiates, PCP, or methadone. So, if you’re using antihistamines containing the above-mentioned compound and you undergo a drug screen for methadone, PCP, or opiates, you’ll test positive.

These medications come in lozenges, liquid, or tablet form. As the name implies, these medications suppress the urge to cough out, and it also lessens the frequency of coughing. These medications contain ingredients such as diphenhydramine, codeine, and dextromethorphan, among others. The compound we’re focusing on is dextromethorphan because it’s very similar to a compound present in opiates and PCP. A patient medicating on cough suppressants will test positive for a drug screen for PCP or opiates. Common examples of cough suppressants include;

Antibiotics are medications containing antimicrobial elements that halt or kill the growth of bad bacteria. They are prescription medications for the treatment of bacterial infections in the body. When we talk about bacterial infections, we’re referring to medical conditions such as urinary tract or sinus infections. Certain antibiotics, such as Quinolone antibiotics, contain an ingredient that can cause a false positive on a drug test for opiates. Examples of these antibiotics include;

These drugs are known to enhance the human’s response to external stimuli. They work by increasing the levels of certain chemicals in the brain. This will make you stronger, more alert and more focused as well. Indications of CNS stimulant usage include enhanced breathing rate, heart rate, and blood pressure. However, these medications answer why you have a failed drug test for adderall prescription. Adderall and Ritalin are textbook examples of CNS stimulants that can cause false positives on a drug screen for amphetamines or methamphetamines.

These medications are anesthetics. They deaden the nerves by blocking them from sending pain signals to the brain. They’re usually used during surgical or dental procedures. These medications contain a chemical compound that’s also present in cocaine. These medications are less susceptible to addiction because they lack those euphoric feelings that a dose of cocaine will give. In summary, you’ll test positive for a cocaine drug screen if either novocaine or lidocaine is in your system.

As we mentioned earlier, medications aren’t the only thing that can cause a false positive on a drug screen. Some substances are susceptible to that as well. The common ones include;

CBD Oil is also referred to as cannabis oil. It’s an essential oil derived from the cannabis plant. This oil contains healing properties, so it’s regularly used to provide relief from pain, muscle cramps, joint pain, chronic pain, nausea, sleep disorder, and many other medical conditions. Its benefits are endless. Anyways, that’s not our focus. Its quality has never been in doubt. CBD oil contains THC, which can also find its way into the body when you smoke weed. In essence, if you consume CBD oil topically or orally, you’ll test positive for a drug screen for THC. It answers what can cause a false positive drug test for THC.

These seeds have certain health benefits, but it begs the question, “can poppy seeds make you fail a drug test?” The short answer is yes, it can. Poppy seeds are oilseeds derived from a plant called the opium poppy. This plant is used in producing opiates. People consume poppy seeds directly (raw) or indirectly (through products manufactured with poppy seeds, such as bagels or muffins. Poppy seeds are rich in iron and enhance blood circulation in the body.

During manufacturing, poppy seeds are thoroughly cleaned, but they still retain trace quantities of opium. Unfortunately, some labs use the old threshold for opiates which is 0.3 mcg per ml. So with poppy seeds in your system, you’ll definitely test positive for a drug screen for opiates.

Even our beloved vitamin supplements can cause false positives on a drug test. These supplements contain Riboflavin, which is also commonly found in eggs, meat, milk, nuts, green vegetables, and hemp-seed oil. The latter is extracted from cannabis seeds and contains THC. So if you’re consuming these supplements, the outcome of a drug screen for THC will definitely be positive.

You may wonder what tonic water and false positives have in common. Tonic water is a manufactured drink that contains quinine in dissolved form. This compound is commonly found in malaria medications, but you don’t know that this compound has a similar structure with a chemical compound present in opiates. A generous amount of tonic water in your body will cause false positives for a drug screen for opiates.

How to Dispute A False Positive Drug Test on Probation?

We know it sucks when you get a failed drug test but did not smoke. You can follow specific tips to dispute a false positive drug test effectively. You need not just to know this but carry it out because you know what happens if you fail a drug test – you could lose your job (in the case of an employee) or say farewell to the chances you had of landing that job you were applying for (in the case of a job applicant). So what do I do when there’s a false positive drug test result? 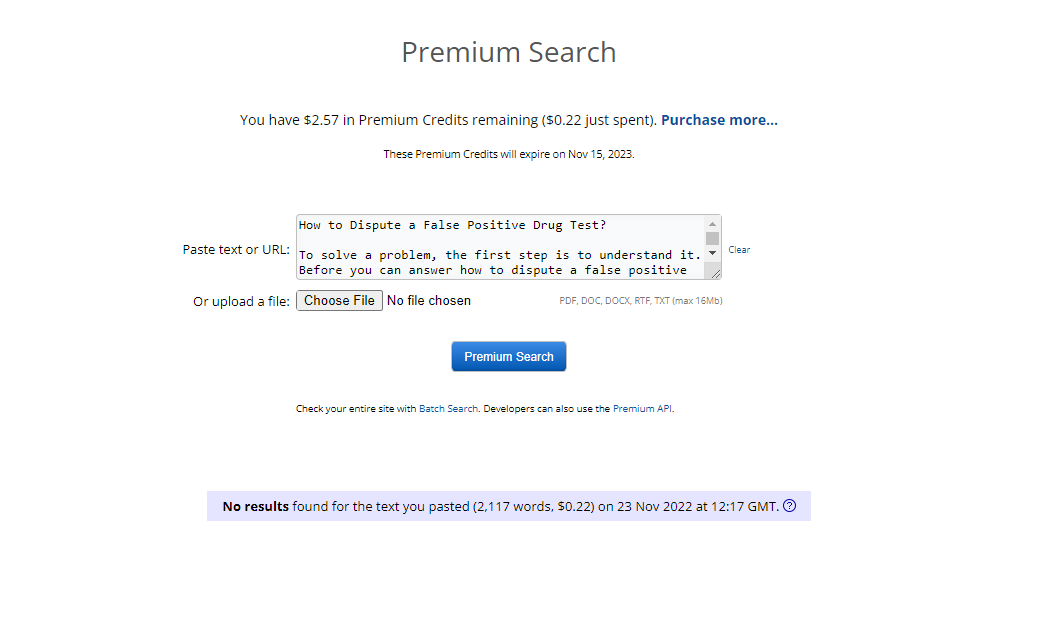